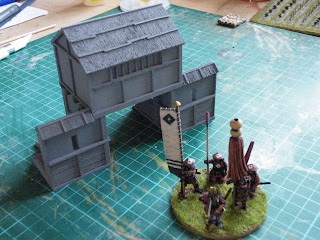 Just a short post to show the gateway for the yamashiro that I'm working on at the moment. It's based on several of the many yamashiro that have 'appeared' in Japan in recent times (Think how motte and baily castles are studied in England as an example of what I mean).

This gateway is quite a simple one which will make it quite easy to cast.  It will come fully assembled with the gates under the block house hopefully positionable and either painted or unpainted like all the rest of the catalogue items. 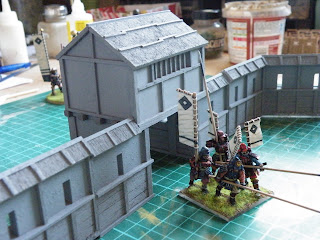 Of course, there are many different styles of gateway, wall, tower etc but like anything, it's getting the best choice and balance for the wargaming table.

Anyway, enough from me, I have things to make and cycling to watch :-)

I have my mojo back ! 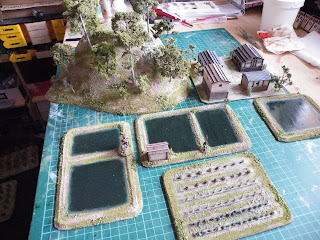 Well, after a cracking holiday, rather bad e-mail problems and a short time being a couch potato I'm back making things and rather enjoying it as well :-)

First off, I've been busy all weekend making more of the large 15mm samurai terrain commission, a selection of which can be seen on the right here.

Before it goes to the client I think I'll do a proper set up on my boards and get some really good photos done as it all looks quite good at the moment as it is (even though I do say so myself ;-) 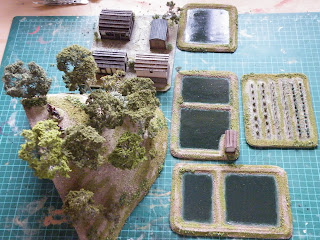 There is quite a wide selection of items that were ordered and it's been fun doing them all actually. Whereas my preference is for 28mm, doing these has given me a chance of doing 'more' to fit on the table as it were. I'm not going to drastically change to 15mm but I think I'll get a few more painted and see what small scale rules are out there (skirmish most probably).

Having made a steep Japanese style mountain before in 28mm it wasn't to hard to make a 15mm one, just cutting down the growie detail a little bit and obviously the scale of the trees. 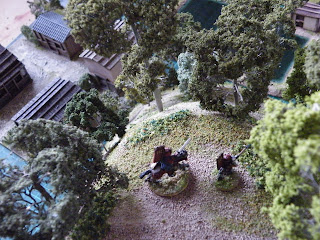 It has a base and rear face of MDF as it will be placed on the table edge.

The flat area on top is for a small temple which is almost ready for casting. It's basically the same as the odou from the 28mm catalogue .

The trees are removable but some of the small bushes have been permanently glued in to break up the large surface area of the mountain side. There is another one to do which will sit in the corner of the table, more on that in a later post. 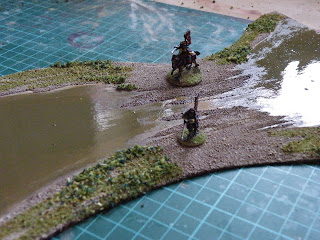 There are also some river sections that have been done and more to do. It's been quite difficult to get a river colour that I'm happy with but I think with a bit more work this one seems to fit the bill.

The sections need another couple of coats of varnish on them and some slight variations in tone to the water and then they'll be done.

There are also a bridge and water mill sections to be made and these will get posted when they are complete. I'm half tempted to paint the bridge red but that's not really accurate for the countryside ;-) 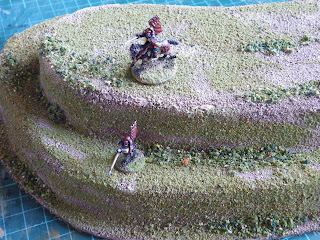 Next up is a stepped to go in the middle of the table, not too happy with the height of the steps  but we'll see what happens.

All the terrain has the same groundwork on them and I'm quite pleased with the result, it's not to flat in colour but not overly colourful (if that makes sense).

I think I'll make some of these for myself but perhaps slope the edges a bit more to make their impact on the table a little less imposing.

Well that's enough chatter from me, I'll put up some more pictures below for your pleasure :-) 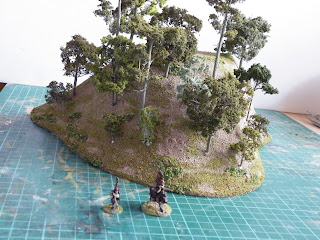 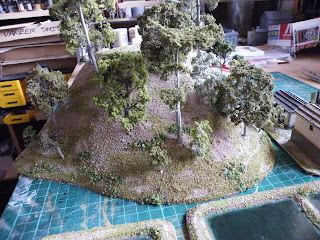 ttfn
Posted by jimbibbly at 19:25 No comments:

Aha! Back from holidays :-)

Well, it's been a while but I'm back into the fray at last but obviously having been away I don't have much to show for it :-/ 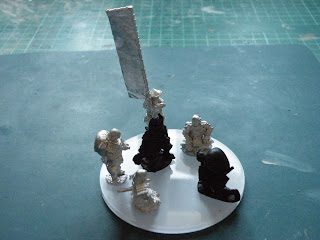 But what I do have is some more figures for Hail Caeser to sort out and show :-)

This is going to be my generals command base for the samurai, I thought about making a full on maku screen version but (as always) it was going to be too big, probably not a real problem but for the time being I'm keeping things fairly small.

I've also got 32 pikemen primed and started for the Sanada Clan but using the ladder motif instead of the 'Roku mon ji' (six coins) to represent a different member of the clan. 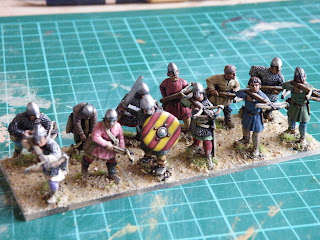 I've also dug out some Norman crossbowman and started to rebase them this morning, it's only a small unit for now but I know I have another 8 somewhere and eventually I'll dig them out and get them painted. The thing I like about Hail Caeser is the fact there are no strict lists or points systems to adhere to like so many other rules systems out there. Just play with what you like or have (within reason of course :-)

Obviously there has to be some historical accuracy involved but it is rather free form, which I like. It is also a good impetus to get all those unfinished figures painted! 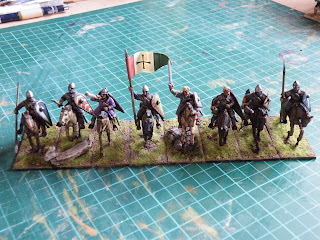 The other unit that I have is the cavalry but I'm going to leave these based as they are (25x50) because I quite like they way they have turned out. I have about another four primed and ready to go but these won't be done for a while yet.

Some levy troops will be next on the shopping list to balance the force out a bit more, unarmoured spearmen and crap cavalry, several units of each.

I've also got to think about some terrain for them, but what though... ;-)

ttfn
Posted by jimbibbly at 07:54 No comments: