But only a couple of shots... 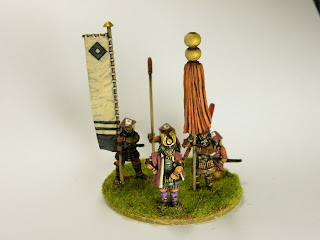 There should be some more later today whether I get them based or not. It's a command base for Hail Caesar even though I haven't got the rules yet, it's on order though :-)

The clan is Miyoshi carrying on from some of the first Perry samurai figures that I painted many years ago. The unfortunate thing being is that the Miyoshi clan got wiped out in the latter half of the 16th century... bit of a bugger when I'm interested in the late Sengoku period. 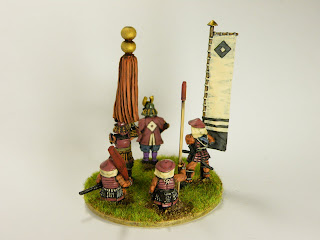 But never mind, I still like the clan mon and already having a good many units already painted I decided to carry on with them as a sort of 'what if' situation (albeit a tenuous one).

The shot to the left shows the rear of the group and the commanders Haori which I kept simple but I think it works well.


There is a constant colour theme in the group and even the retainers have the clan mon on their armour and jingasa which I don't normally do. 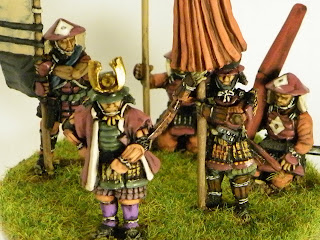 I have started to base up any new figures I do on 40x40's in preparation for Hail Caesar, the basing I have already will work fine but I like a change (if a small one).


As with pretty much all of my figures I don't paint the eyes anymore, I actually thinks it detracts from the feel of troops on the table. I understand and appreciate when people do it but it needs to be done well to work properly and I can't do that anymore :-/ 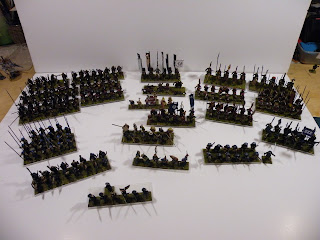 The last shot is of my entire collection as it stood a couple of months ago, these are being used in a photoshoot at the moment so I have nothing to play with but I have enough bare lead to do the same amount again :-D (not that I get to play that often)


Admittedly the photo is a bit dark but you get an idea of the force composition. There are Sanada and Miyoshi clans there and also a small force of either Ikko Ikki or Wako depending on the senario.


Any, that's enough from me, I have figures to paint and scenery to make :-)

Well, that went quicker than I thought, and turned out rather well :-) The windows are a tad too blue but I don't think it matters too much. 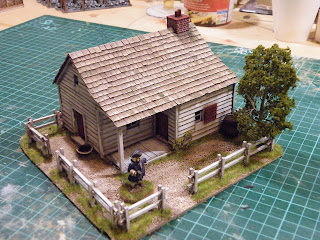 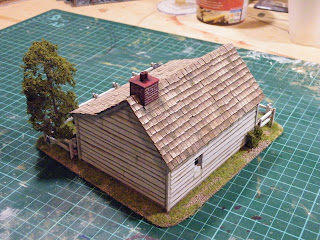 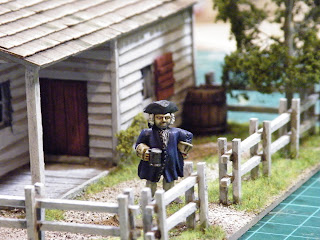 Now the hiatus has abated somewhat I should be down to a few postings a week :-)
ttfn
Posted by jimbibbly at 23:33 1 comment: 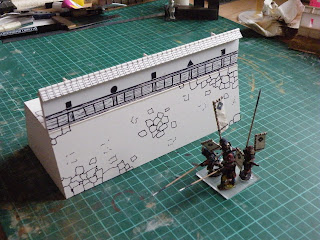 Today, I have mostly been working on 28mm samurai terrain and masters. First off, I made a sketch model of what I want the 28mm white castle walls will look like both in general appearence and the frequency of shooting holes and the rear supports. I still need some working out to do so that they will fit together in a nice modular fashion.

I will also have to make corners (both internal and external) and of course a gateway but I'm happy with the way this has come out. 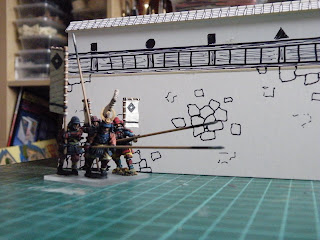 Keeping a balance between wargaming and reality is always problematic but I think this does the job well enough.

The wall is 100mm high and the the length is 200mm. Depth on the top is a plentiful  50mm and the depth at the base is about 95mm. These dimensions could change but not enough to make much difference.

I'm probably going to have three different top wall choices as looking through the books I have there are so many variations on a theme that it's almost impossible to make a catch all (well, I think so anyway. Once you start to research deeply into anything, even the smallest difference in things becomes apparent). 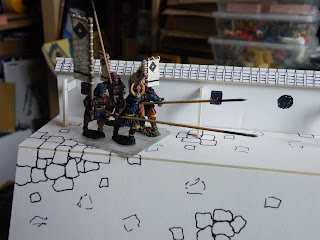 The idea being is that when the walls are ordered you choose which top to have and if the choice is unpainted all the bits get supplied and if painted then it's all assembled and sorted for you.

I only wish that the real thing would be as easy to make as the mock up :-) In fact, it's almost tempting to make a whole castle this way and colour it in and use that... But being the purist that I am, it's not going to happen. 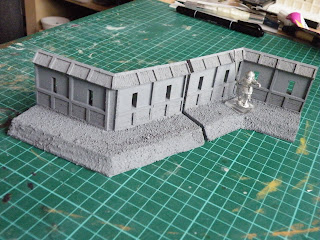 The other main thing that I've been working on today is the yamashiro corners (as seen below). for the moment I'm only going to be casting the 60 degree corners, the 30 degree ones will be done at a later date after all the other main components are finished and cast up.

I've started on the gateway for the yamashiro but there's not enough really to show at the moment but when it's ready it'll be posted :-) 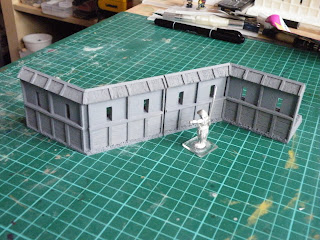 To complement the range I will be making the following,

A wall section with a small building attached
A large barracks (similar to the one already available)
A tenshu or keep, smallish but useable
30 degree internal and external corners
A well
A couple of small ancillary buildings
And if time and cost permit, a corner tower built into the wall.

Well, that's it for now, the walls will probably go into the mould this evening but I want to get on and finish the AWI house from the earlier posts :-)

15mm Samurai terrain (for a change) 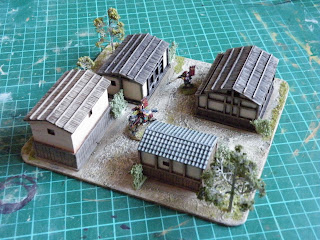 Recent commission on the go of some Japanese specific terrain, namely fields, orchards and paddy fields. There isn't a lot of English info about the type of mundane rural terrain and scenery in Japan but I've fortunately got plenty of Japanese books which have plenty of great illustrations of just the thing I'm after.

I've also done a small village layout as per my clients instructions. I've done these before and I quite like the way that they have turned out. 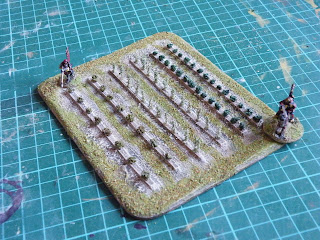 The paddy field was a bit of a no-brainer as you can still see them in rural Japan and they won't have changed much. The field of veggies took a bit longer to sort out by going down the route of looking into what sort of food was mainly consumed then and finding images on Google and then trying to find something that looked about right (being 15mm I'm willing to ease off on the button counting :-) 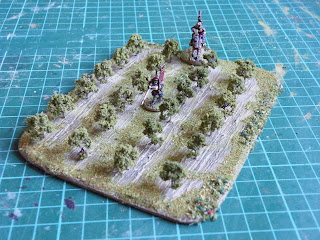 For the orchard I took pretty much the same route as the other two above, a mix of Google and Japanese books and in the end came up with young orange trees. They actually look a bit small but after seeing some images they fit the bill fine. I haven't stuck any oranges on them though, you'll have to take my word for it ;-)

I'm going to put another couple of layers of varnish on the paddy field but it's a last thing at night job because it stinks and I can put it in the attic to dry over night. The little shack was added because of an illustration from a wood block print that I found in a book and it seemed to be the right thing to do. 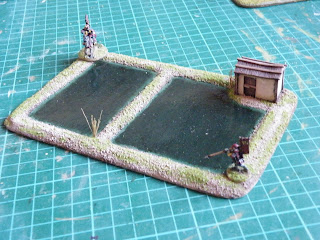 I've got plenty more of these to do but that's it for this weekend for the 15mm. Later I'll be doing more 28mm Japanese masters and some more on the AWI house (which has it's ground work stuck on and is primed). 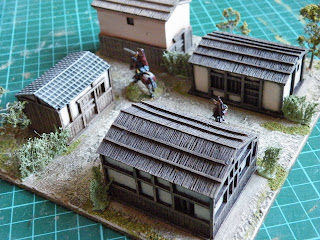 If anyone is interested in this type of terrain in 15 or 28 (or even 6mm) then drop me a line at info@oshiromodelterrain.co.uk

Have chimney, will cook (and won't burn the house down) Made the chimney this morning and placed it on the roof (best place for it really). I'll prime it grey and then work on the groundwork and hopefully get it finished on Sunday...

Most of the weekend will be spent on OSHIRO as I have a few things to catch up on and I'll probably post them here in due course.

More on the house, plus a little extra... 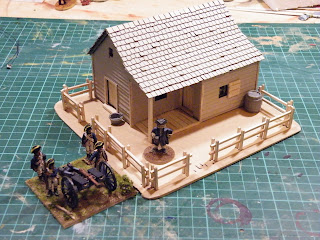 Well, I did quite well today (the time being 1:20 in the morning helps) and the construction of the new AWI house is done. As you can see, the doors, fences and window details are all on, all I need to do now is undercoat in grey and the sort the groundwork out and it'll be ready for painting :-)

Although, I've just realised that the chimney is missing :-/ Well, it'll give me something to do tomorrow morning before breakfast. 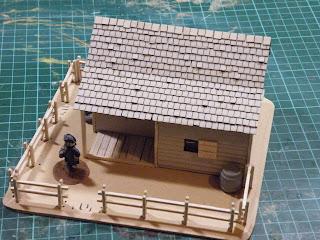 I've also posted photos of a house that was done a while back (again no wips) and is based on the Leinster house from the ACW but for me it'll do for AWI.

Some of the roof tiles/shingles have been lifted up a bit to give a bit more texture to the roof itself, I might do a few more but we'll see after a coat of paint because it's something that can be done afterwards as well as during the construction. 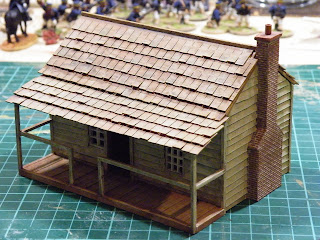 I personally like the scenic base and I think I'll be doing it to all the AWI buildings and bits that I'm going to do. it certainly adds more character and makes them less 'static', if that makes sense.

There are more photos on my Photobucket page and when I figure out how to link to it I shall do in one of the side bars.

The roof of the Lienster house is removable but the roof on the new build is stuck. No particular rhyme or reason, they just turned out this way. 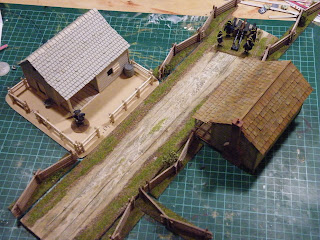 The other buildings that I want to do include a barn, another larger house, a mansion (you know the sort I mean) and some sort of official town building with stonework as the main feature. I'm also going to make a blockhouse as I sold the one I already made I sold  at Salute.

For the final shot I've set up a rough beauty shot (rough being a nice way to put it), when the new build is painted I'll take them out into the garden with a terrain board or two and take some decent photos :-) 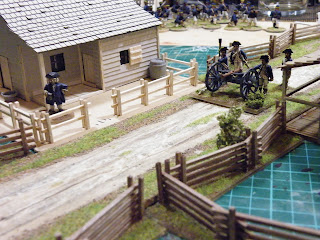 ttfn
Posted by jimbibbly at 01:39 No comments: 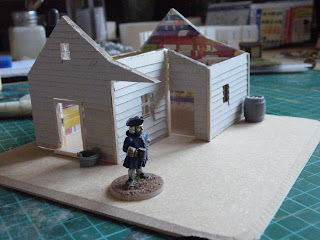 Well, here we have a wip of an AWI house for my (funnily enough) AWI collection. I've decided to go for a largish scenic base (I normally only make the bases just a bit larger than the building itself). Most of the other inspirational AWI buildings I've seen on the web all seem to have scenic bases for them.

It might take a couple of weeks to complete as I've got a huge load of stuff on the go, some of which will appear here but the intention is to upload with photos of what I'm doing at least twice a week... We'll see...
Posted by jimbibbly at 07:31 2 comments:

Well, joining the fray wasn't as bad as I thought. Took long enough though...