Going to Japan you can't help but notice the almost near future style of the cities, with cramped tower blocks vying for space and a host of bright electric signs.
This type of city has inspired me to do my own version for 28mm gaming and to have it in the style of Akira. For those who don't know what Akira is it's basically a near future, almost post apocalyptic vision of Tokyo with biker gangs, government agencies and psychics. The film is quite a mind boggler but it does have a certain appeal (my paltry synopsis really doesn't do it justice at all).
For this project I'll be keeping more with what modern Japan (specifically Tokyo) looks like but adding futuristic elements to give that near future vibe.
The first I did was to draw up a simple, generic block of flats. These can been seen all over Japan in differing forms and colours. I'm keeping as much as modular as possible to allow for playability and changing the look of the board.
This a quick shot of a primered set of floors but without the ground floor shop, not very clear at the moment... 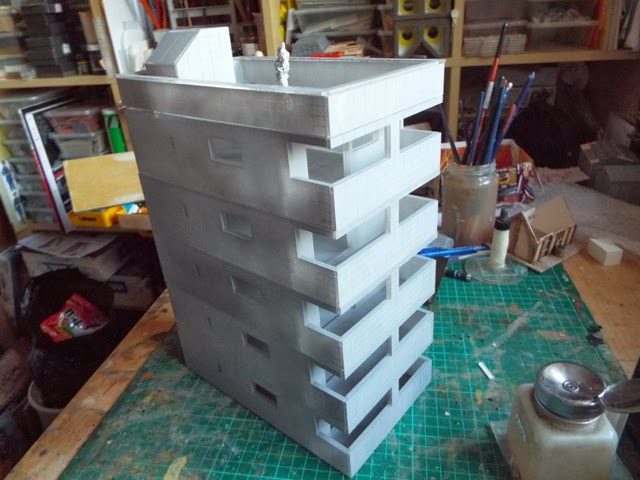 This is a view with a test coat of paint and limited weathering. The tiles were marked in the lasered grooves with a technical pen 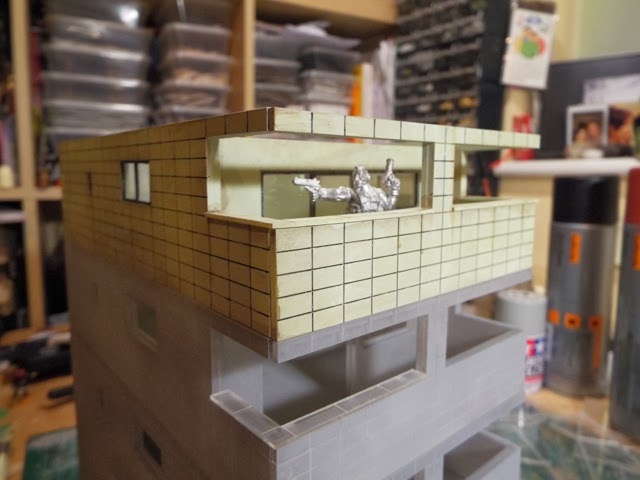 This is a kit that will be for sale in my catalogue within the next week and below is a slightly better shot showing the top floors. The window frames are left out at this stage to allow for the ease of painting. 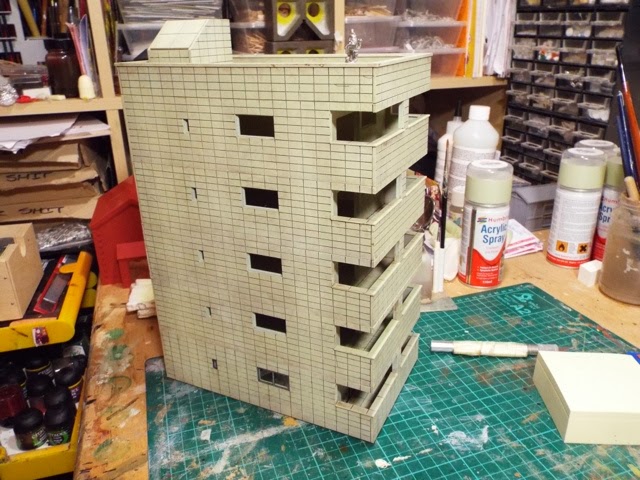 The ground floor shop had to be generic and I've drawn up several different designs for shop signs that will hopefully not tread on anybody's ip :-) The kit will come with window frames and glazing. 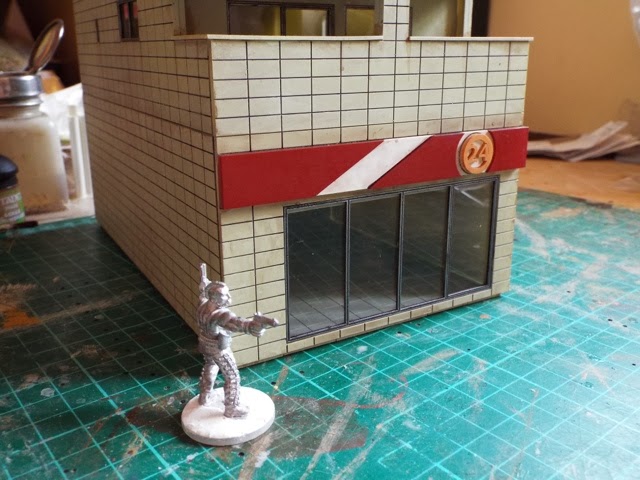 For the gaming table I will also be trying to light as much as possible and below are a couple of pictures of the shop being lit... 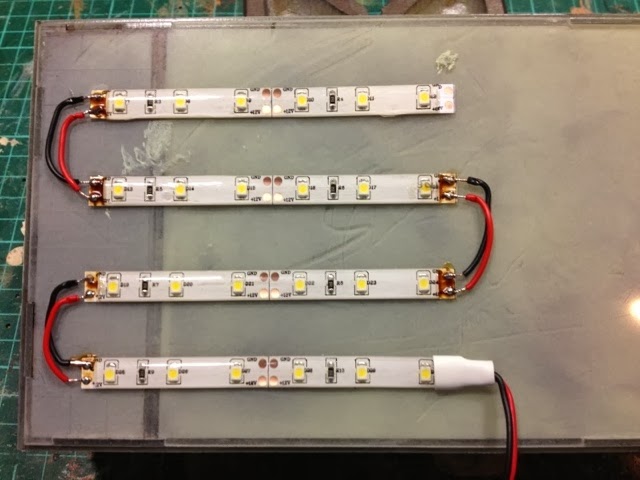 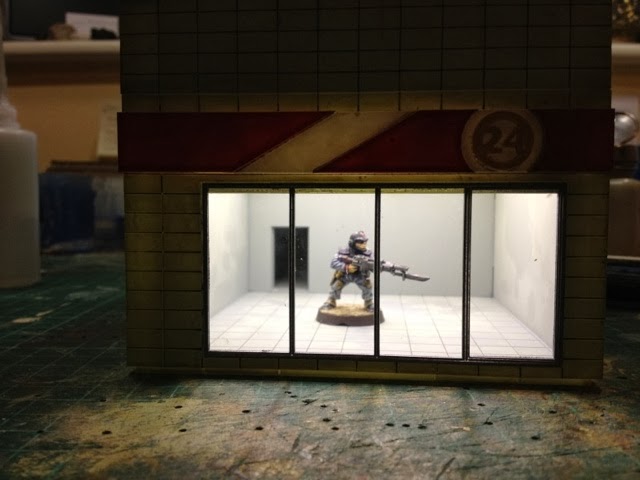 One of the features of modern Japan is the very busy, utility based skyline and I hope to achieve that with plenty of these power lines. This one was a test but I will be making a slightly simpler version for casting purposes. 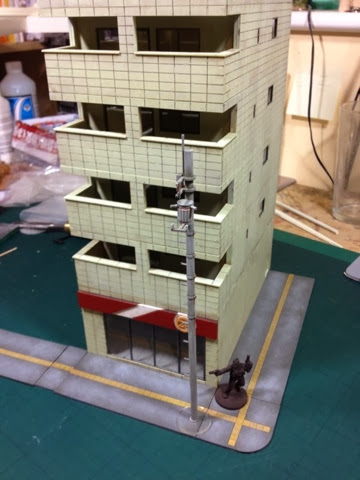 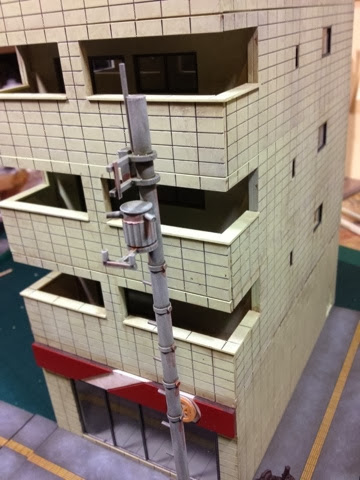 One of the more different structures is the city parking tower which can be found all over the central areas of Japanese cities. An ingenious solution to the ever increasing lack of space, it's basically a tall carousel on which cars are driven on and then rotated for the next free space (that probably doesn't make much sense).
Below are some group shots of the original block of flats with a second one on the go and the parking tower in the middle. 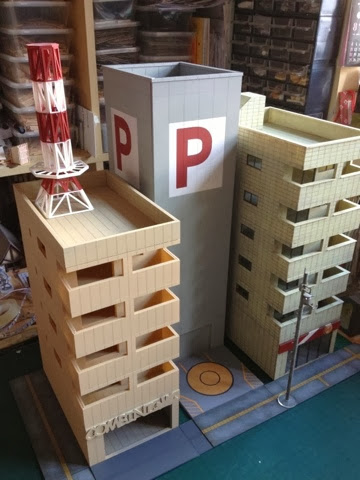 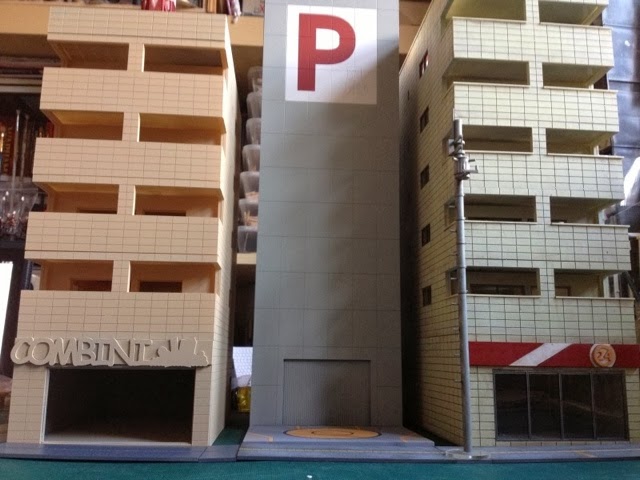 And what Japanese skyline wouldn't be complete without the obligatory red and white comms tower. This will also be in kit form and could be used in many sci-fi settings. 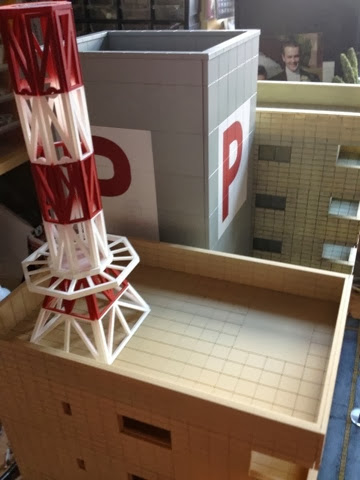 Last but not least I'll be producing an extensive range of small accoutrements and additions to add to the exterior and interior of the buildings, starting with some air con units. I'll be making some bigger ones to go on the roofs and next will be some shop shelves. 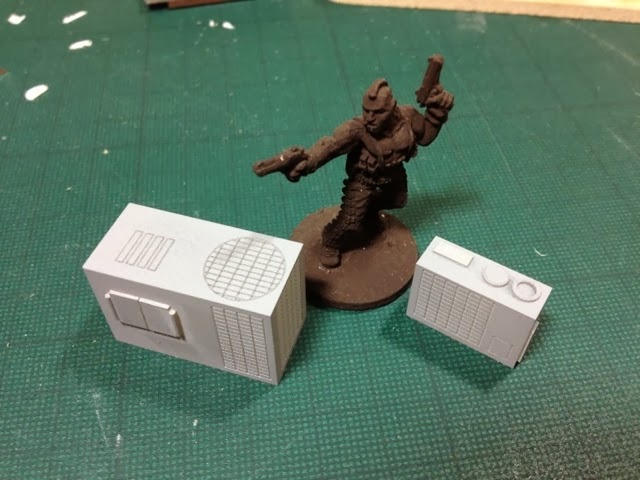 Quite an extensive project as you can see but it has been on a back burner for several years now.
More to follow on the actual board itself in a month or so (after my last show of the year) and more on different types of buildings as and when I get a chance to design and build them.
ttfn
Posted by jimbibbly at 23:27 14 comments:

Not quite but I've got a samurai commission to show.
It took a little longer than I would've liked but it turned out well in the end :-)
This arrangement has proven quite popular for commission based works and this time the request was to have removable roofs. I used the original templates from the resin catalogue items but cut them out of slightly thicker material to allow for the impression of a decent wall thickness. 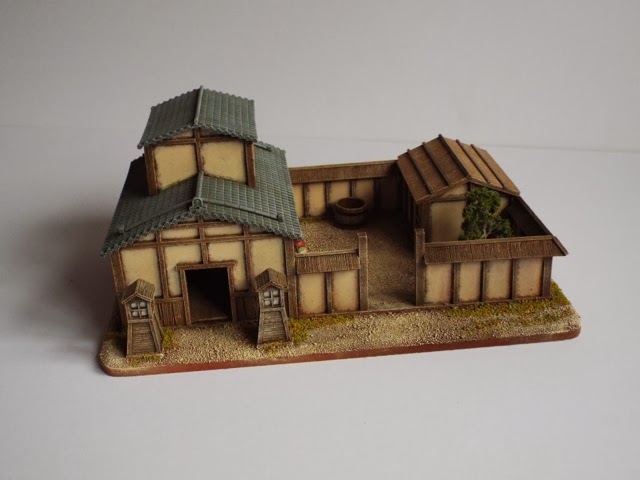 I unfortunately didn't really take any decent wip pictures but if look at some of my previous samurai posts you'll get a good idea of the general construction process. 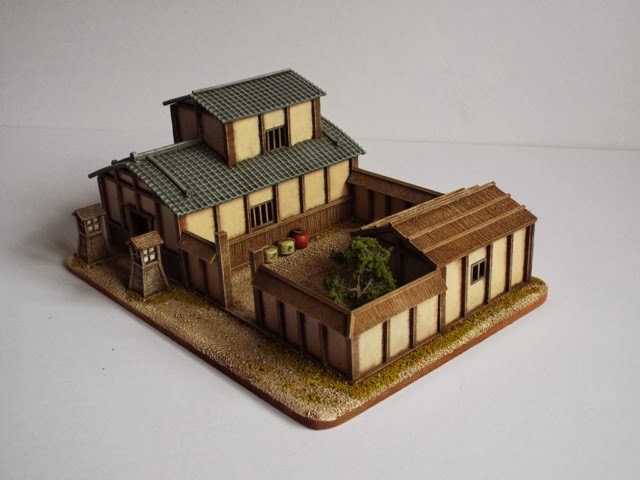 The only slightly difficult part was making the upper roof on the merchants house due to the fact that the upper floor is just about on the same level as the eave line. A rib construction under the tiles allowing for the low floor solved the problem though. 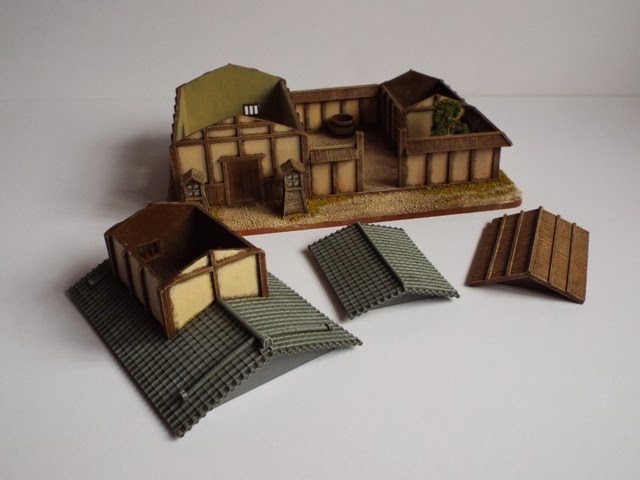 An additions set (JA01) and a small tree were included to add that little bit extra of lived in detail. Below are a couple more shots along with some detail ones. 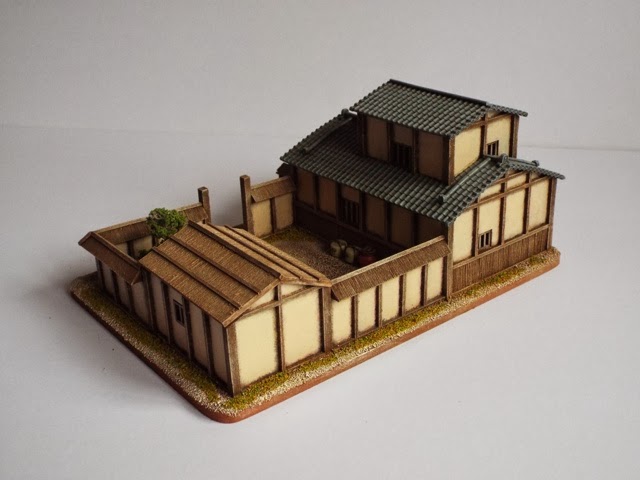 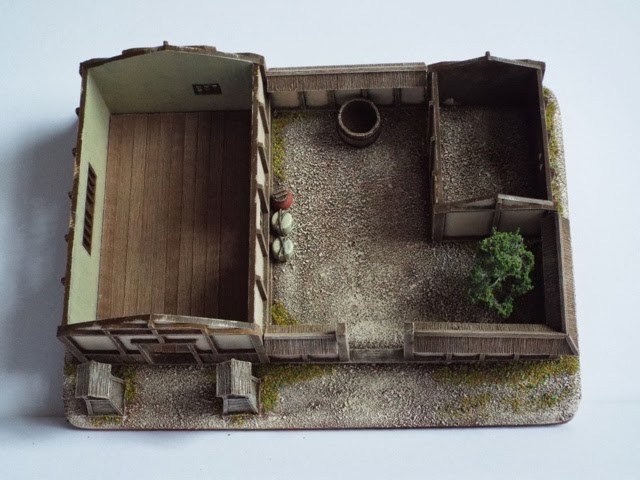 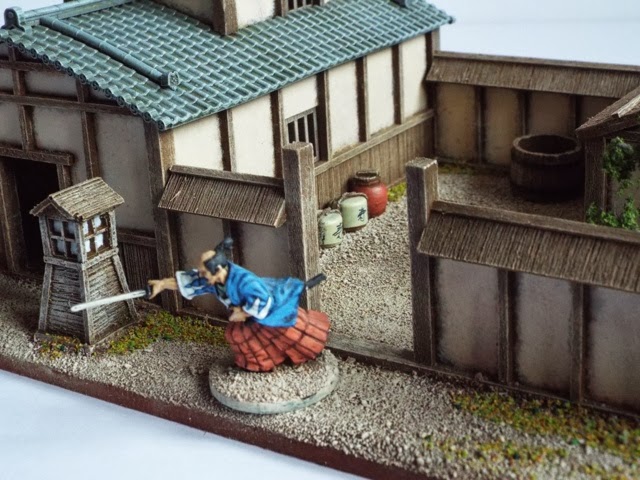 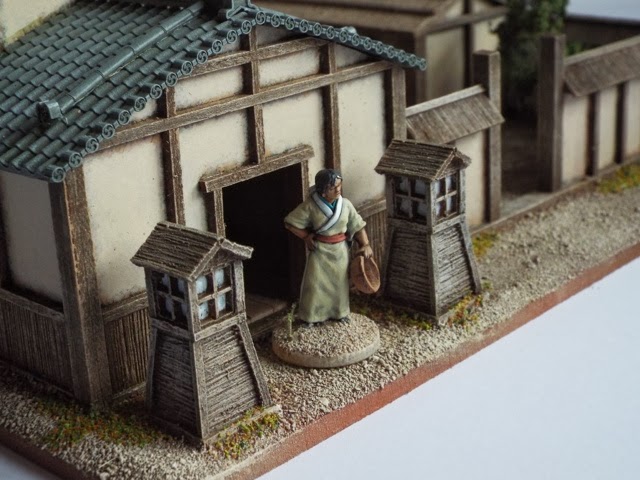