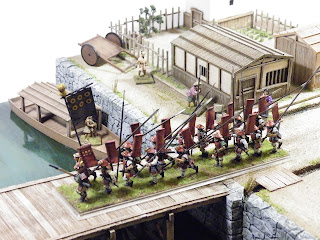 I will also have a bit of a write up on various elements that were on the boards and a few thoughts on the show in general (not many though). I warn you now, there will be a lot of pictures at the end of this post :-) 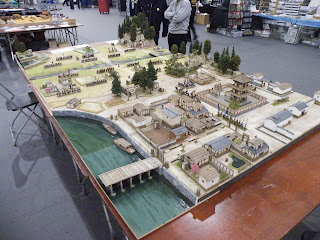 For the board itself, it was decided long ago to make a town, or a portion of a town, that would have been typical of the period and location. Obviously for gaming scale reasons, the town itself had to be foreshortened somewhat but the elements were there.

Japanese towns were typically laid out in a grid pattern, altering around whatever terrain got in the way and having various districts such as a merchants one, a samurai one etc. There were also small religious districts or compounds that popped up. 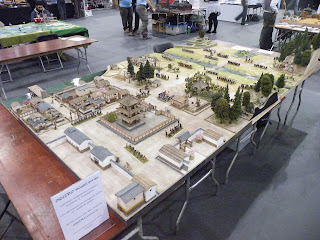 The other reasons to have a town board was to show off the items available in my catalogue and the fact you don't normally see this sort of Japanese game being displayed. It also gave me an opportunity to try some different models for Japan instead of the normal fair that I have been doing recently.

All in all, I'm really pleased with the way it turned out, much better than previous years which I thought were rather lacking in some way or another. 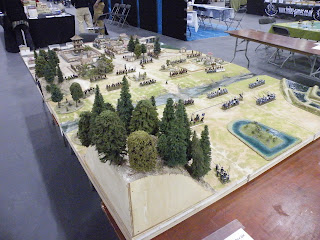 The boards themselves were a mix of previously  made ones that I've had for many years and specially built ones for the town itself.

An interesting fact about Japanese towns is the thought that goes into the planning, they don't just 'grow' but are laid out and constructed to an overall masterplan (of sorts).

One of the elements that must be included is the addition of drainage ditches that surrounded the various compounds. 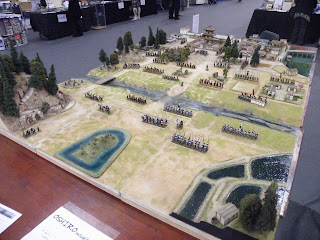 They can be seen on some of the closer photos and were basically cut into the boards and either clad with stonework for the richer areas or just left as normal groundwork for the poorer areas.

As I mentioned, Japanese towns were laid out in a grid work, this made the designing of the town a little easier as all my boards are 600mm square so it was quite a simple case of having crossroads, tee-junctions and straight sections made. The only thing to be aware of is the different road widths depending on the location. 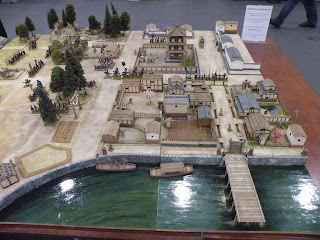 Generally, wider roads were in the more affluent areas and had a cleaner look about them, whereas the narrower ones were in the merchant districts etc.

The painting of the boards was kept simple and normal groundwork techniques were used but on the roads themselves, more drybrushing was implemented to give the impression of well worn thoroughfares.

A few bits of greenery were added here and there just to break up the monotony. 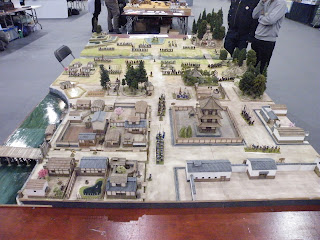 Most of the various elements can be seen in more detail in other blog posts (roadside shrine, building bases, village base, paddyfields etc) but one thing I wanted was to have a pagoda in it's own little compound.

The construction of this was kept as simple as I could get away with but still with enough detail to make it 'work' as a recognisable structure. The top roof was from the roadside shrine that is in the catalogue but everything else was made especially for it. 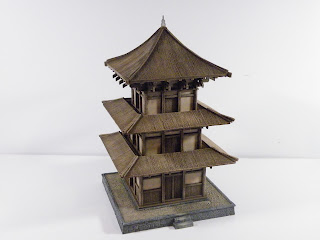 Pagodas usually come in either two story, three story or five story. The two story ones are different to the typical looking three and five story ones but I'll be making one of them in the not so distant future...

The actual layout of a pagoda is quite straight forward, ever decreasing floors with projecting roofs but the trouble lies in the details, of which there are many! Most of the detail is in the roof supports so I had to find a way of keeping the feel but making it easy to build and paint (as time was running out). 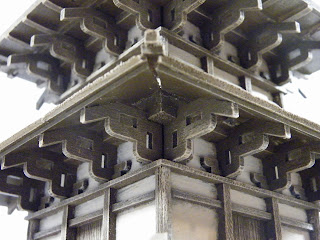 I solved this by only having one 'strut' coming out at each wooden 'grid line' (you'll see what I mean from the photo to the right). The floors were simple enough to do, normal box construction, keeping the woodwork simple but retaining enough basic elements to be identifiable.

The roof were cheated a little bit and kept flat, whereas the slope was achieved with the corner pieces making the whole thing a simplish construction. Turned OK in the end :-) 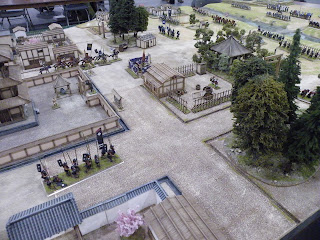 The board got a lot of praise from those who saw it  (from what I can gather) and there always seemed to be a large crowd around it taking photos, which was nice. A few people came over to the stall (which was nearby) to comment on the board, which again, makes it worthwhile :-)

I've probably missed out quite a few things that should be mentioned about the board so forgive me if this is the case, if you have any questions then just leave a comment and I'll reply the best I can :-) 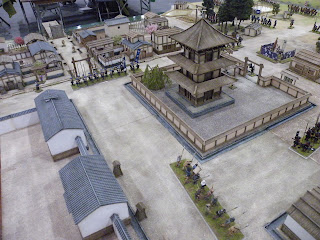 All the figures were Perry's, the vast majority painted by myself and a small faction by 'Janner', a nice chap who frequents various fora and whom I have gotten to know quite well (even though he does take the piss quite a lot :-)

As for Salute itself, it seemed a lot busier with more of a buzz than last year although of course I didn't really get to see any of it although what I did see looked good with a large variation of games on display (many, many pictures on the net now, for which I am rather thankful). 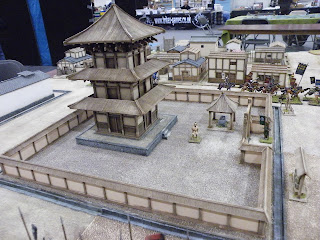 It's good to see our hobby progressing the way it is, ever onward. I'm not going to delve into the reasons and wherefores as others have done before with more clarity than I ever could, I'll just say that it seems to be a good time to be a wargamer :-)

My own little offering (Oshiro) is growing steadily and it's been a pleasure to be able to do what I can and coming up with new things to make and hopefully expanding the niche that I've found myself in :-) 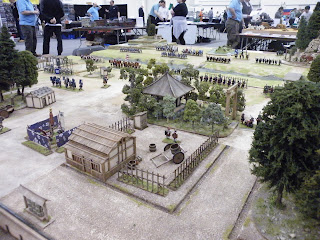 I'm looking forward to the coming year as I have quite a few new things on the horizon and hopefully they will prove useful and popular. Just to be a bit of a tease I'll just say that there will be a new figure range (other than the Boxer Rebellion) and a couple of new building ranges (other than Japanese).

Anyway, I'll leave you now with a fair few more pictures of the game on the day and a big thank you to all those who came by, said hello, had a brief chat with and those I managed to inspire :-) 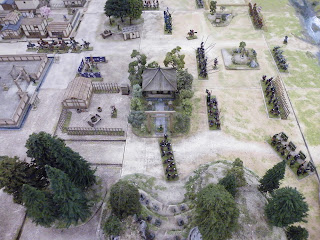 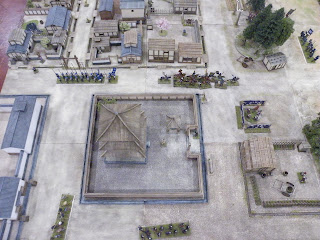 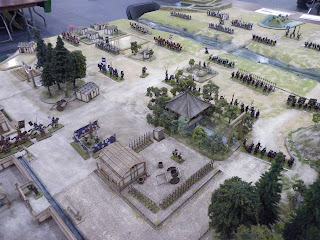 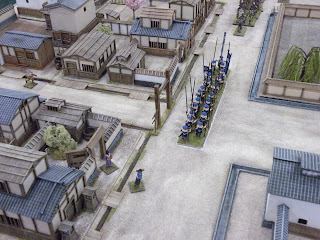 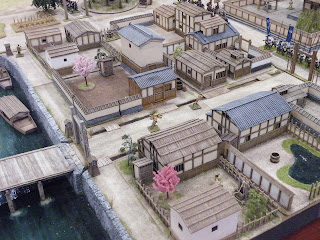 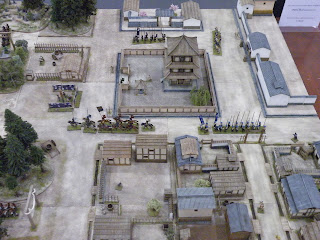 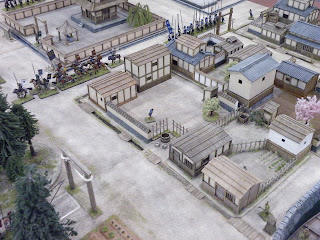 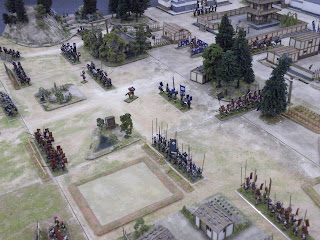