It's been a while but I haven't been slacking, I've been a bust little bee and tonight there's something to show :-) 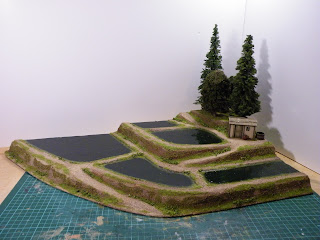 Having been to Japan several times and seeing the layout of the general landscape (countryside that is, not the urban areas), I've noticed that paddy fields (or tambo) are quite often found on the sides of foothills sloping up to the hills proper so I thought I would make one for the table top.

Quite simple construction really, hardboard base with 25mm insulation foam layers. You've heard it called 'blue' or 'pink' foam but this stuff is actually a strange mustard colour :-/ 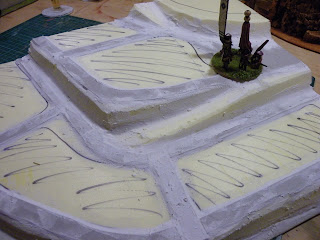 The foam was roughly cut to shape (three layers, each smaller than the one below) and stuck together. The paths were then cut in because I wanted to get them in the right place to get the 'feel' of the location right and it was easier to do this with all the layers stuck together.

The field borders were made from 2mm thick card cut with a bevelled edge and filled smooth with normal household filler. The whole lot was given a quick sand down to get rid of the worst lumps and then everything apart from the fields themselves were sanded as normal. 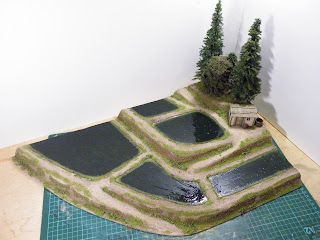 I unfortunately didn't take any photos of the intervening stages but it's the same sort of process that I implement on most of the other terrain I make.

The fields themselves were painted with a very dark green and highlighted around the edges and corners. They were then given a coat of yacht varnish and will be given more when the first coat has gone off. The more coats you can put on the better as it really adds to the depth of the water.

At some point in the near future I shall get my boards out and do a sort of photoshoot but enough yammering form me, more photos below :-) 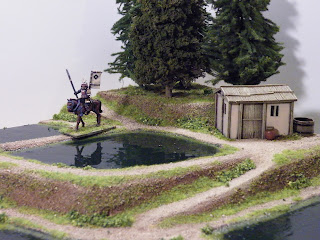 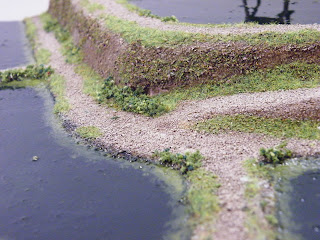 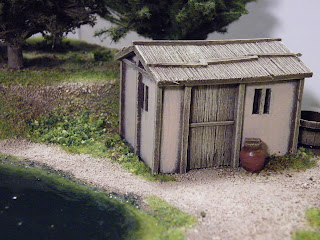 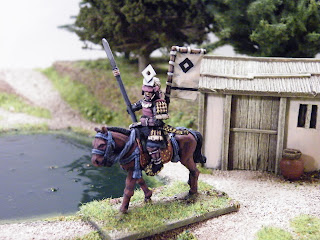 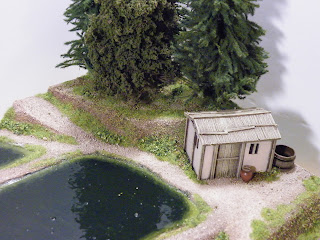 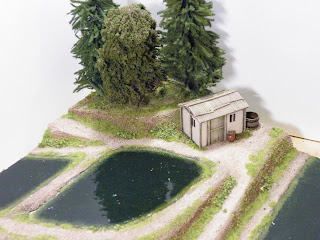