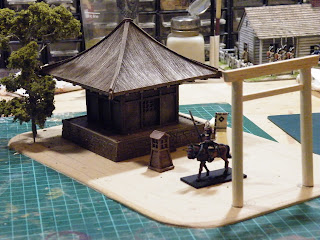 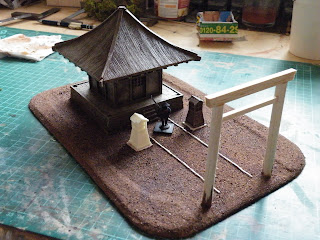 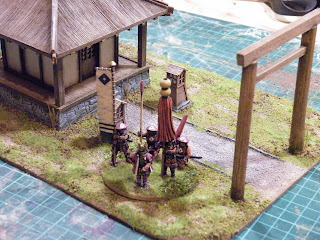 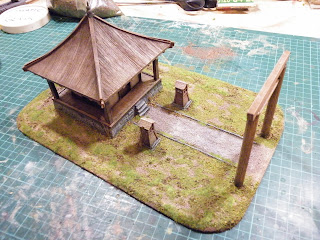 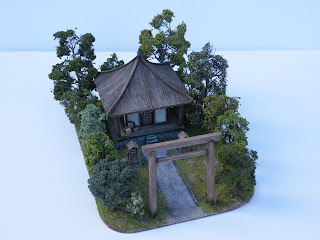 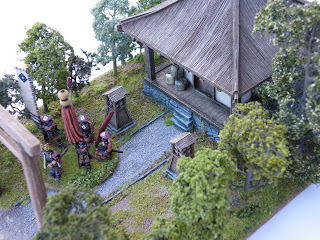 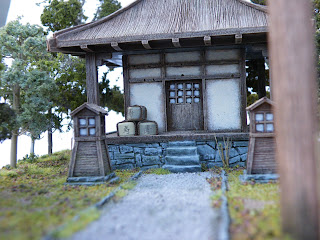 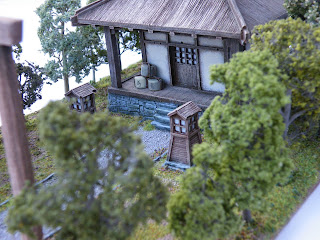 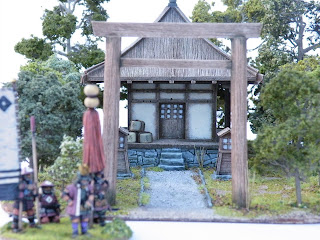 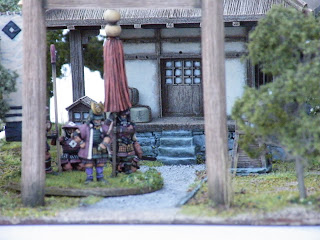 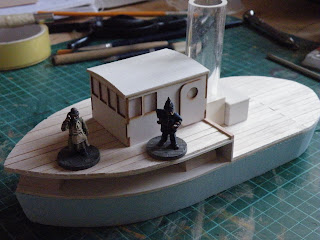 Ah crap, it's been to long. And here I was saying that I would get at least a couple of posts a week down...

Anyway, for tonight's viewing pleasure I have a 28mm Victorian tug boat that I've been meaning to do for a while now. If any of you chaps reading this frequent the Lead Adventure Forum (and if you don't I heartily suggest you do!) you will know that I am doing a Victorian sci-fi force of a Japanese colony on Mars. Many troops and flying things have already been done and will get put up here at some point but I have plenty of civvy things in mind to go with the force and this is one of them. 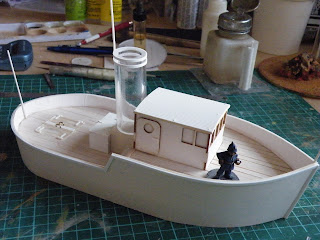 Basic construction is a blue-foam hull with card and balsa wood decking with a card wheel house and plastic tube for the funnel.

The hull sides are from card and took a while as I had to  bend the card (1.5mm thick) and tape it for a couple of days to let the wood glue go off completely. It's not the best way to do it but I was feeling a bit lazy and wanted to get it done. The card was cut off roughly at the bottom following the blue foam and then I took it into work and took a bit more off the bottom with the bandsaw (it was too high as it was). The edging is microstip. 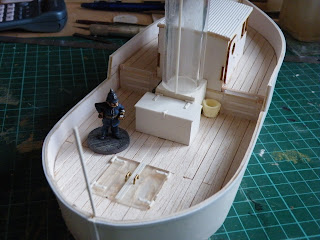 The rear 'hatch' and stowage box are from sheet styrene and perspex with relevant details from microstrip added (hinges etc.).
The figure is an unknown bobby which is actually a rather nice sculpt and was pleasing to paint.

Other little details were added such as the small sand bucket and the ladders to get to the fore deck. Rivets were glued onto the doors, roof and 'boiler' block to add a bit more of a something. I wanted to keep it simple because I know I can get bogged down in detail and not finish what I started. Fortunately, I think there is enough here to look pleasing and to be playable also. 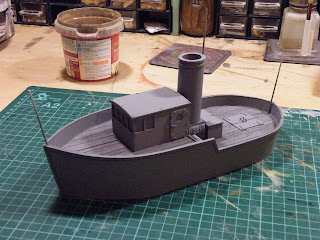 The shot to the left is of the tug with a coat of Halfords grey primer (one of the best all round primers out there I reckon). If you click on the picture itself you can make out the details better. The canvas roll on the side of the boiler block is from Games Workshops Imperial Guard range from one of the tank kits and have proved useful in the past for various projects.

Next was deciding on the colour scheme, something simple was called for but recognizable as a generic tug. In this Google images was my friend and the next shot shows the basic colour design I went for. 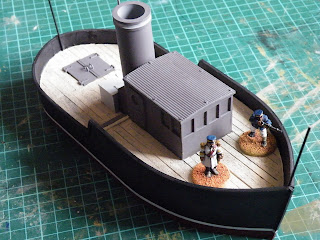 The white strip was painted first and then it was masked out with normal masking tape and a scalpel blade was stuck flat to a block to create a constant level to cut the masking tape around the shape of the hull. When doing this a few light strokes are much better than one heavy one because even tough the blade is stuck down (with superglue) it can still drift off line if you're not careful. The lower portion of the tape was removed and a deep red was painted on the bottom of the hull. When this was dry the process was repeated slightly higher up to create the upper edge of the white band, black was painted above this line and when this was dry the masking was removed to reveal an even white line all the way round the hull. 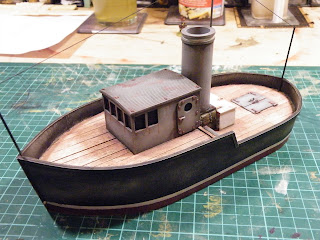 There were some slight mistakes but I left them on as the tug is a work horse and I didn't think the owner would be too bothered by a sloppy paint job ;-)

The deck was painted with Foundry Palomino light and then given several different brown washes to give some depth to the deck. The wheel house was coated with Foundry Granite and washed with a mix of Devlan mud and Thraka green inks again from GW (some really stupid names for their paints :-/  ). It was then dry-brushed with a light grey I had. The stowage box was painted with a light grey, washed with the above and the touched up with normal white paint. 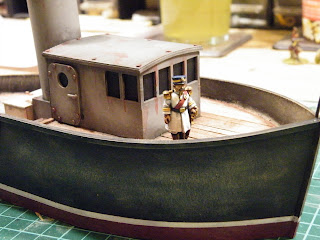 For the rust I mixed a very watery but bright orange ink and used a fine brush to localise where the rust might form. The main hull was dry-brushed with the same light tan colour used for the deck as I wanted to tie the whole thing together and the windows were given a coat of very dark blue with no high lighting because I don't think it works to well. the funnel was given a band of white but I decided to leave the funnel the same colour as the wheel house instead of doing it in more traditional tug colours (tan, red and black) as it will match my Japanese aeroneff force. The chap on the front is a converted Copplestone Chinese general. 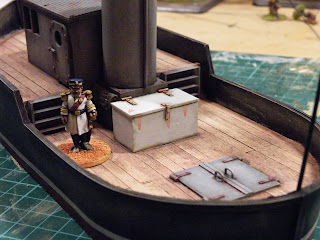 The final shot is of the rear and it shows the details off quite well.

I went around most of the edges with a very dark brown ink just to help emphasize  the shading. The rigging (two pictures above) was simply black thread with a touch of thin superglue to hold it in place and as soon as I can get my dratted printer to work again I will print out a Japanese navel ensign just so we know who's it is :-).

If anyone has any questions (because I've been quite brief) then please leave a comment and I'll get back to you. Thanks for reading (if you managed to get through it all). there will be another small post tomorrow about my Hail Caesar samurai and samurai terrain.