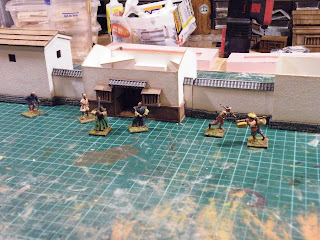 Well, I've been getting bits and pieces done for a while now but now I've started in earnest.

This years samurai board will consist of the outskirts of a town, a fair few hills, a bit of a river, some of the terrain that has already appeared on here (namely the roadside shrine) and if I have time a corner yamashiro, tall but compact.

The town will be sized down in reference to the ground scale (what I mean here will become clear in time) but most of the elements will be present. 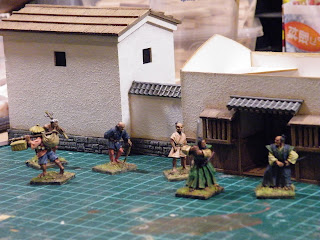 Every Japanese town of the period would have samurai mansions and residences as part of their makeup. I've chosen the easy way out for this table and I'm only going to show the outer walls/ancillary buildings.

Basically, the town would have the richer, more influential people (generally samurai or high court officials etc) towards the centre and the poorer, merchant types towards the suburbs (merchants were treated as a lower class of person in the period) including the retainers etc. This of course wasn't a hard and fast rule but quite common. 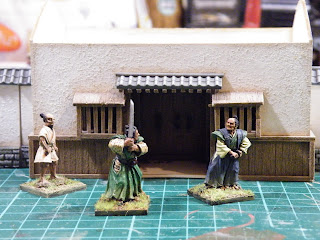 For the buildings shown they are just about done apart from the tiles roofs on the entrance and long storehouse. This will be done this week.

I will also be doing some plans of the table layout to help me along the way and when done I'll post them up here. 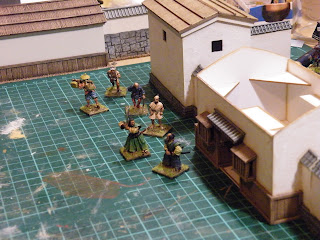 For the actual town I will be making urban boards (again, shown on here when done) and I hope to have a few vignettes in various places to give character.

For most of the normal buildings I'll be using items from my catalogue but there will be a few special ones thrown in to break it up a bit. The table itself will be 12x6 and the fight will be happening along the length instead of the width. The idea being that the attacking troops will be coming in from the mountains and the defending troops coming through the town. All will be made clear later :-)