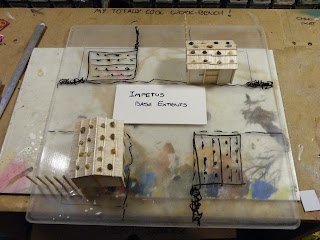 I was hoping to get this done last month but as always 'real' life gets in the way (house hunting for one) and so it's in February's offerings.

The brief was quite simple, a village base of three to four buildings on a foot square base with enough room for an Impetus base and a cherry tree :-)

I was originally going for a simple cross road layout but after a bit of though I changed it slightly to a tee junction with a smaller 'lane' leading off the top of the tee (as can be seen in later photos). 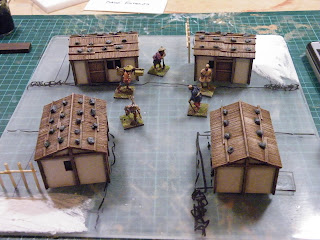 It was made in pretty much the same way as I do most of my Japanese terrain but the buildings were given a more rural feel with the addition of stones on the roof. These were used to keep the roof shingles in place and also Japan can get quite windy sometimes ;-)

As you can see from the photo on the left, the two rear buildings have been moved closer together. This helps give the base a more rural and random feel instead of the regimented layout in the photo at the top. The buildings were dirtied down somewhat as well. 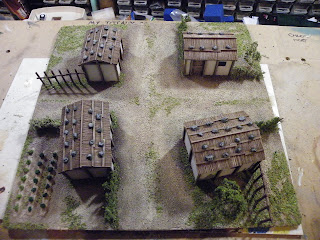 The base was sanded and painted as normal and various types of 'growies' were added in varying places to give a natural feel to the layout.

A couple of rough fences and hedges were added also. The hedges are supposed to represent bamboo hedges of the type that were grown over there. The bamboo would be tightly grown and bound to form the length and breadth of the hedge and they would be trimmed periodically to keep the height down. It seems to have worked on the model but I'm always looking out for something that would be better. 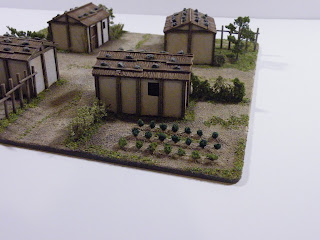 A cherry tree was added and a few bits from the additions range. I also made a small field in the back of one of the buildings and a well in another.

It should fit well with the rest of the terrain that I have made for this group (nice bunch of chaps in sunny Scotland) and hopefully there should be some more in the offing which will be nice. I believe they are putting on a demo game at Carronade on the first of May, so if you are in the area drop by a have a shufty ;-) I'll leave you with some more beauty shots. 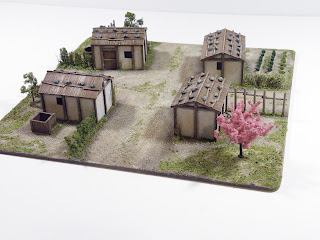 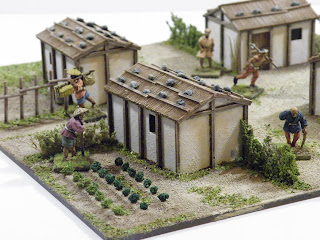 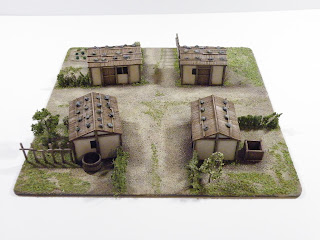