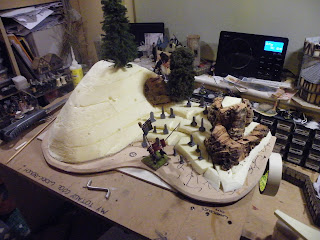 For today I've only got one thing to show, and it is a rural hillside graveyard which will be used for next years SALUTE board.

The basic shape was roughed out of yellow insulation foam and cork bark (where would we be without this!) which was placed randomly to look nice and to create a smaller profile that another hill wouldn't.

The base is 6mm MDF with a slight chamfer on it and everything was stuck together with a  hot glue gun (probably the best option for doing this sort of terrain. 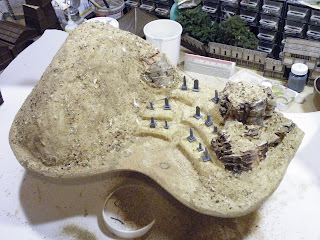 The hill and ground were then sanded as per normal and then inked with watered down Windsor and Newton Peat ink.The rocks were also inked and one of the many good things about cork bark is the variety of colour that it has.

The graves were already stuck in place (but only undercoated) so a little care was needed in sanding around them but it didn't matter so much for the ink as it will add to the overall effect. (the black circle is a pen mark for the torii but I decided to leave it off). 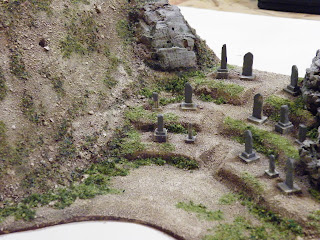 The next stage was to drybrush the whole area and this was done with cheap artists acrylics and a rather large but soft brush. I generally go up in three colours of lightening tones for the drybrushing as it helps to bring the details and contours out, the rocks were drybrushed with varying greys and then some areas were washed over with a greeny/brown ink.

The groundwork was done as normal, using three different types of flocking, one was fine and is for normal open ground. Another is small grade sponge foam (differing colours) and the third is a special mix that I use for treed areas. 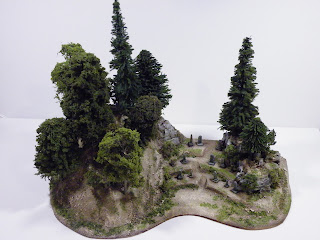 Trees can be added or removed quite easily as during the initial construction process I placed tubes at random intervals all over the hillside and kept them free or debris so the trees (which all have bare wire 'trunks') can be put in any order or type that I have from the box..

The graves were painted individually in different shades of warm greys and the names of who is buried there were written on with a fine line technical pen.

That's about it from me, I'll leave you with some more beauty shots :-)
ttfn 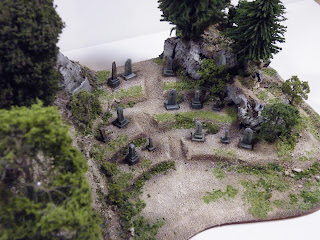 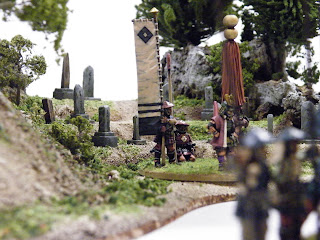 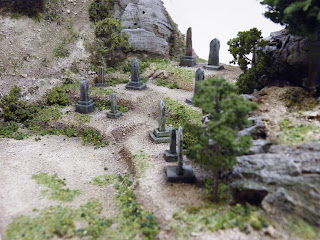 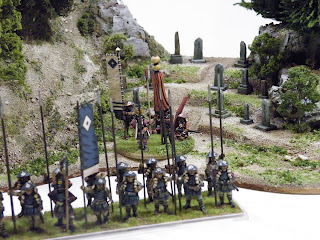