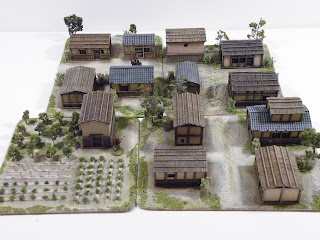 Well, three posts in one week! Something must be going on... Anyway, for todays little sojourn we have a few 15mm town/village bases.

Basically they are buildings from the catalogue stuck onto generic base sizes and then given groundwork treatment around them. I haven't put as much detail as I would for a 28mm version as it would just get in the way for gaming and be quite delicate.

There is enough there though to make it look convincing though. 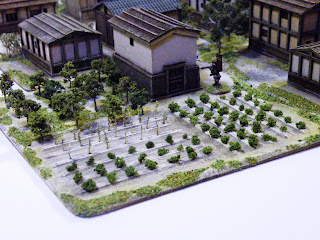 One thing that wasn't originally intended was the field base (shown left, not the best picture) but I thought it should be done as pretty much every single town, village etc would have fields (both paddy and normal) surrounding them.

One feature of a Japanese field is the raised beds, there are quite a few reasons for this which I won't go into now (a post all by itself!) but it certainly gives a definite feel for a gaming piece.

Also, orchards are grown over there with various fruit trees. 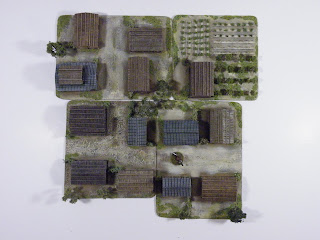 Not much else to say really apart from the fact that I quite enjoyed making it (as I do with all the projects I get) but I got more a sense of satisfaction for this one.

I'd like to get into 15mm gaming a bit more to allow for this sort of thing to be on the table without taking up the whole thing :-)

As ever, I'll leave you with some different shots. 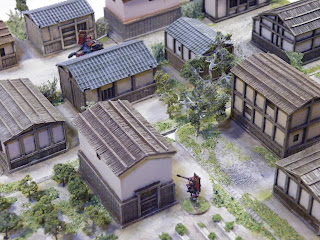 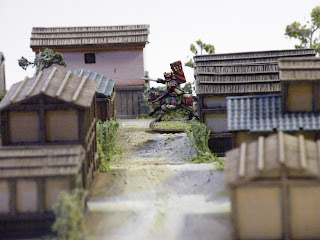 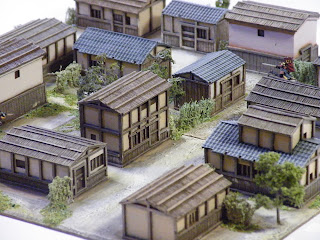 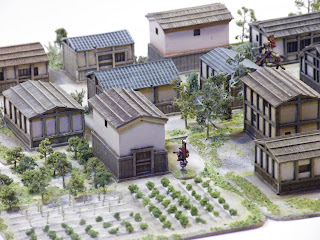 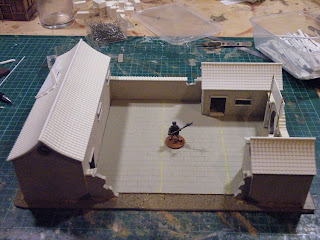 For todays diversion we have a Chinese fireworks factory that was commissioned by a very nice chap from the LAF.

The brief was quite basic, just a compound with a couple of buildings and a broken wall with firework stand as fill-ins and a damaged section as if the fireworks had gone off prematurely. I got the inspiration for the layout from an old Boxer rebellion photo and the rest just sort of fell into place. The basic construction was out of 5mm perspex with various windows and doors laser cut out. 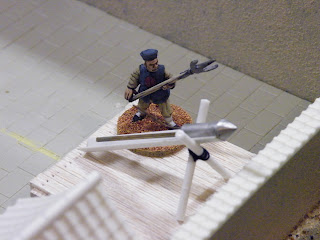 The layout changed somewhat from the initial design but the client was fine with this and once the basic construction was finished the details were added.

As it is supposed to be a factory I thought they would probably test the fireworks on site so I made a small 'launch' platform with a rather crude launcher on it (with of course a fire work standing by). Other details included the damaged wall to the rear, the idea being that an accident had blown part of the wall, roof away and a round door with round windows for the entrance (a suitable Chinese feel). 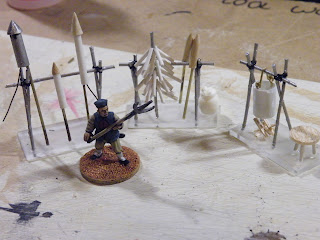 The other main detail was the firework stands that fill the gap in the wall, one of which had to be a large pot of sulphur on a fire (the one on the right).

Once all the parts were done it was on to the painting. Normal creamy coloured walls were the order of the day but for a change I decided to paint the roof red (red glazed tiles as opposed to grey glazed tiles). The groundwork was painted as normal and the floor of the compound was a warm grey. All the base colours were painted first and then the shading and highlighting was done after to bring the colours more together. 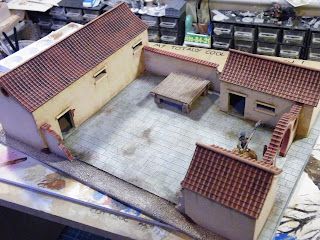 I felt a fair bit of weathering was called for and dirtied down several places with inks and pastels. The explosion damage to the rear needed a lot of weathering  but this was done after the normal shading, highlighting and weathering was done.The firework stands were painted as normal with the only real weathering on the sulphur pot and fire (which isn't lit). There are also signs above the doors in Chinese and they say, in size order from small to large, Powder Store, Warehouse and Testing Room. The sign above the main entrance says 'Wei Lo Bang, The best Fireworks.

I'll leave you with some more beauty shots
ttfn 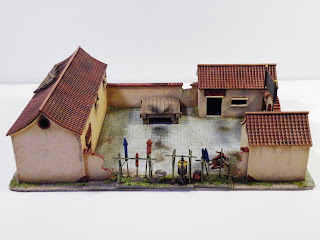 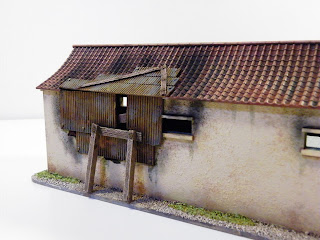 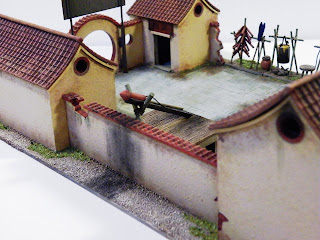 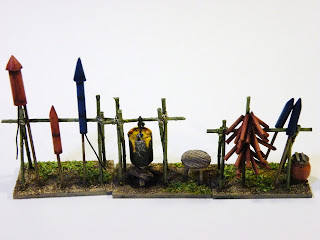 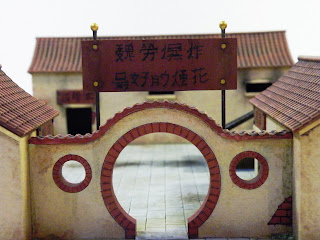 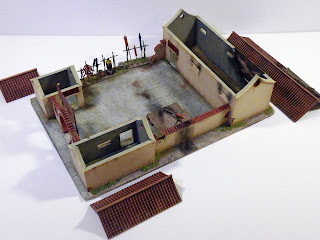 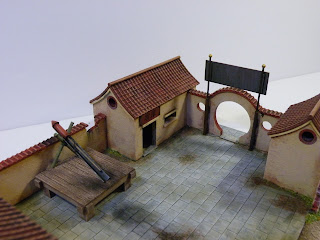 Email ThisBlogThis!Share to TwitterShare to FacebookShare to Pinterest
Labels: Terrain

Slowly bringing in the New Year... 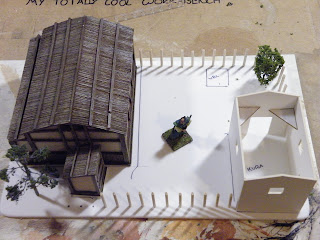 Bit of a slow start for me this year. Not work wise, as that's been very busy (along with commission work) but just getting used to there being a New Year. Didn't seem to sink in that much.

Any way, for the first post of the year I've got a little diorama/terrain piece and some more for the SALUTE table.

This piece was for a very nice chap called Brian who is great to work for as he has an idea and then lets me get on with it using my expertise in the subject. 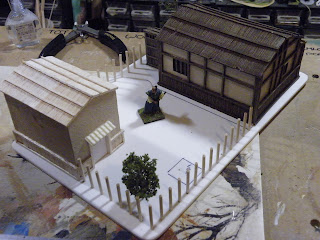 It was for a smallish addition to some of the other terrain I've done for him (see photos below) and is a yadoya, or inn, on a small separate base with an attached garden.

Most houses etc in small towns and villages (right up to the largest ones) would have a small garden or enclosure out the back. This would be used for perhaps a small garden, storage area (the unpainted building in the photo is a small kura or storehouse) or sometimes just a semi private place away from the bustle of the main street. 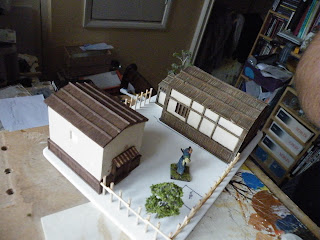 Construction was quite simple, a yadoya was taken from my stock and put in place at the front of the base, a fence was first sketched in place and then later permanently attached. it needed to be worked out first for the even placement of the uprights.

A small storehouse (or kura) was made next based on the same sort of design as the one in the catalogue but smaller and this was placed at the rear.A small well was built also and put towards the rear as this sees to have been the case more often than not. An outside toilet was also added to the side of the inn. 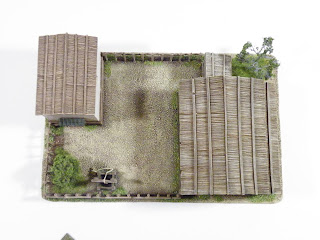 Once all the parts were in place the base was sanded as normal and then painted in the same way that all the Japanese terrain is done.

You can see the layout of the piece in the photo. The bases measures approximately 150mm x 250mm.

A couple of trees were added to give a bit more character and the well had a small rope with a weight attached. a few growies were added around the base to break up the ground colour. 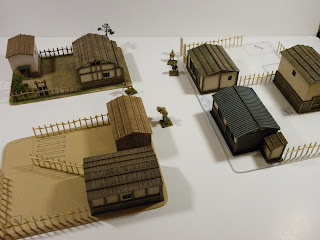 Doing this piece has added to an idea for my SALUTE board by utilizing the same idea for smaller, individual 'boards' that have one or two buildings on and can lead to greater variety in the future.

As you can see it is a very versatile set up with plenty of options, especially with more building bases. The one on the right is for Wayland Games as I am making their Bushido board for SALUTE (more posts on that soon). The one to the rear is Brians and the one at the front is mine for my SALUTE table.

For now I'll leave you with a few different shots of the original building base. 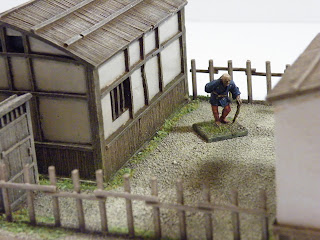 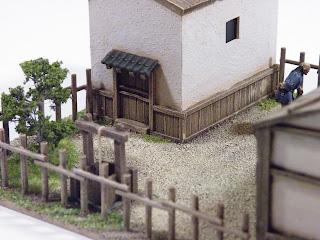 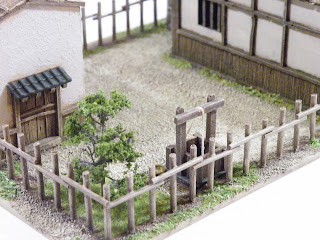