The Pathans are watching

I recently finished a commission that'll be winging its way to its new owner this week.
A Pathan watchtower.
I was given an image of such a watchtower to base the build on but I thought it looked a little regular for the back hills of wherever it might be so I altered it a bit... 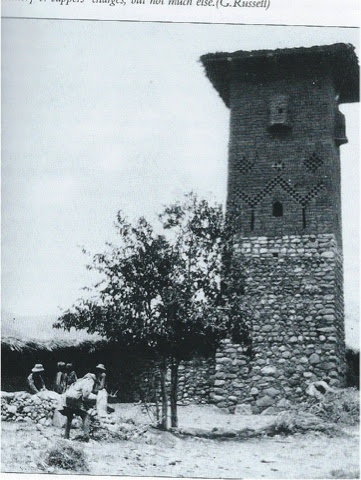 I started off with a blue foam base and sculpted the stones and rocks into it using a fine ball point pen, quite a simple task but you have to be careful in not letting it look like it's been drawn on. After doing the block work a few stones were picked out with some filler on top to bring them above the flat plane of the building side and then a thin wash of filler/glue/water was applied to the whole of the bottom to help tie it together. 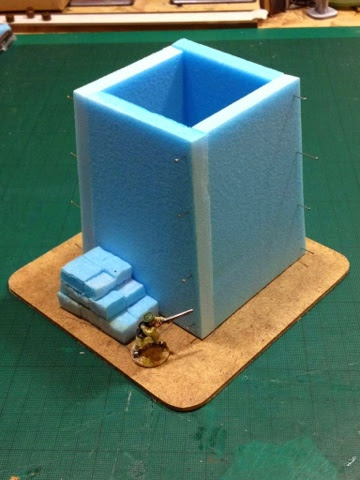 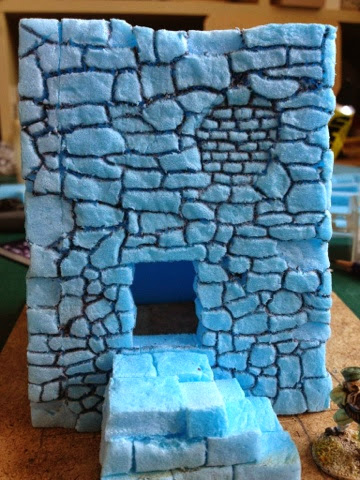 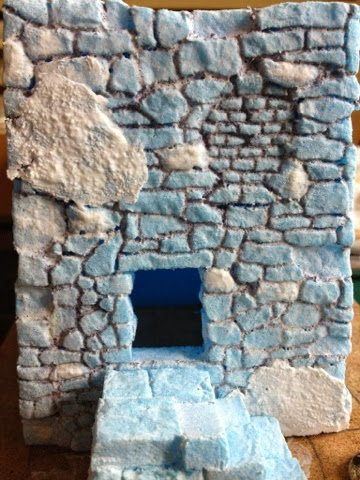 All of the lower floor was painted in a grey/brown and about eight different shades were used to pick out some of the stones to help break up the monotomy. The ground work was done in the usual way, sand, then inked with brown ink and brought up through ever lightning shades of tan. I made it a bit lighter than I normally do to help represent a more arid atmosphere found in the back end of nowhere. Then various growies were applied around the nooks and crannies. 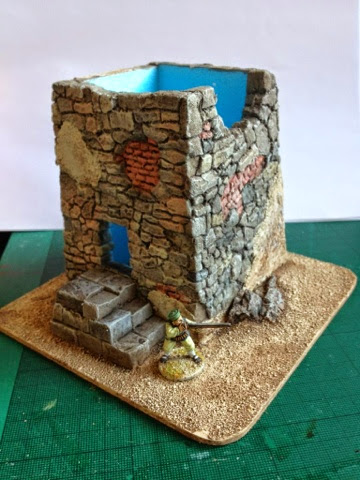 The upper floor took me a good couple of weeks to decide on the best way to achieve it. I was going to use the normal route of cutting textured sheeting and painting it but I thought something a little different was needed... I therefore spent a good few hours cutting up hundreds of little bricks from blue foam. I didn't use a ruler or a straight edge, just a steady hand and a good eye as a little randomness was what was required.
These were then stuck on a layer of thin tape and then built up course by course. The tape was used to enable the top floor to be removed when all was dry and complete as interior access was required. 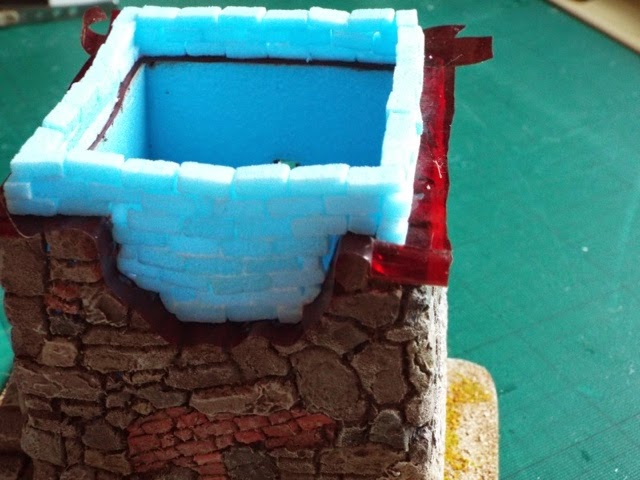 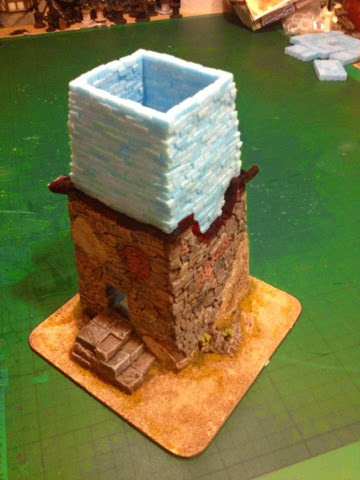 I built up the layers two or three at a time and fortunately, due to the hot weather, it wasn't taking that long for them to be touch dry and another couple of layers stuck on.
I found it a very pleasing way to build and although it's not as quick, there is more control and a definate 'built' look to it. 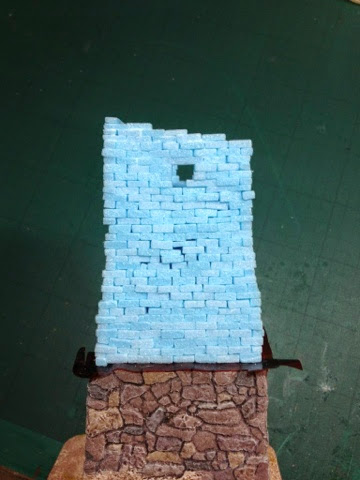 The roof was mainly conjecture but the natural look of it should help to blend it in. A wooden frame was built and then painted, I then used some fine bristles and literally stitched them onto the framework. The fortunate thing was that the bristles were already a decent natural colour and e only thing to do (apart from ink the thread) was to drybrush them. In hindsight, I should've made the roof wider as it's a bit short, but not detrimentally so.
The whole thing stands about 235mm from the bottom of the base and the base itself is about 150mm square. 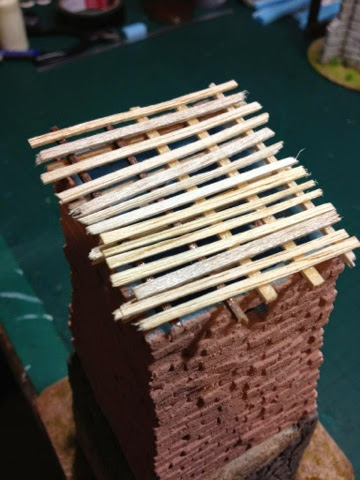 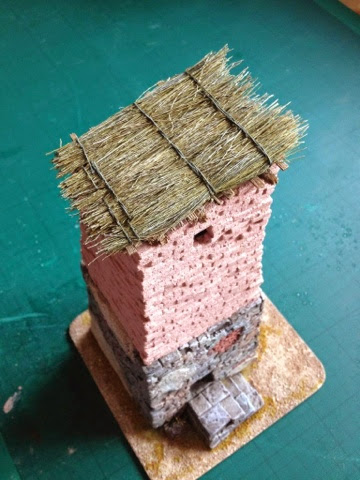 I'll leave you now with some 'beauty' shots but you might see it on the net somewhere in the future as I believe the new owner is going to get some serious use out of it :-)
ttfn 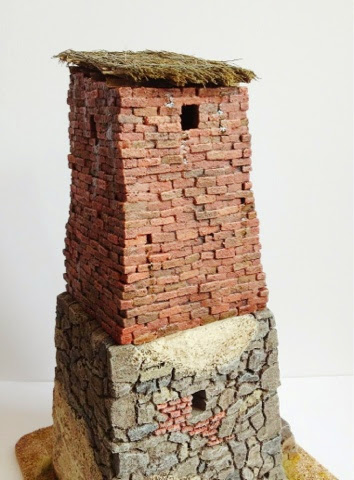 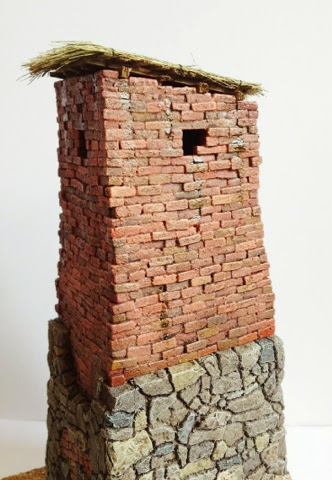 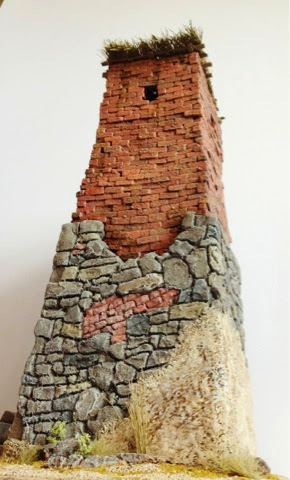 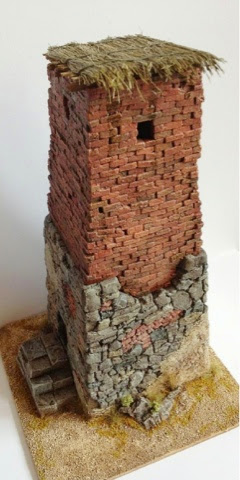