The Werewolf of Berrylands

Thirteenth century England, ancient terrors still roam the land. A vicious pack of werewolves is terrorising the lonely village of Berrylands deep in the Surrey hills.
Only the brave Sir Ronald De Barker and his retinue are prepared to face these terrifying creatures . Armed with a silver edged sword and silver bolts for his crossbowmen they venture into the village to vanquish the evil!
So begins a scenario for the Fistful of Lead Gothic Horror supplement; Tales of Horror. We were  also playtesting rules for Medieval combat hence the unusual period setting. 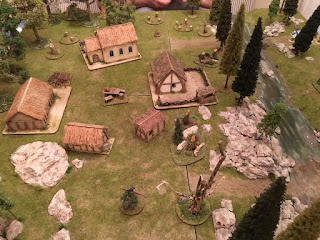 As usual with all our  FFoL games it was tremendous fun. Brave Sir Ronald riding his charger crashed into the Werewolf pack as it crossed the river. He managed to drive the Alpha Wolf back and then with two swings of his holy sword he decapitated two Werewolves! 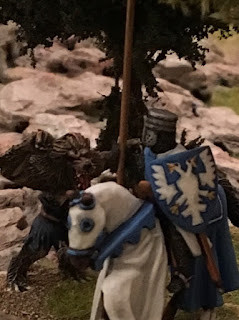 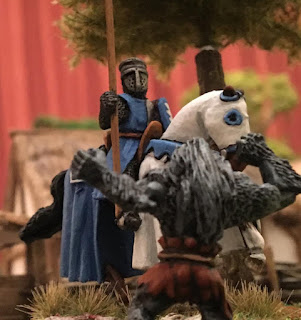 His luck subsequently changed when he was dragged from his horse and was horribly ripped apart in front of his men. 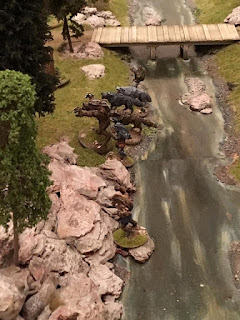 The Alpha Male made several howls causing fear in the soldiers and due to a special trait called regenerate wounds the Werewolves were difficult to put down.
Sir Ronald’s retinue fought bravely but due to appalling dice rolling. Eight ones rolled, the rest of his men were dispatched in rapid succession by the rabid Wolven. Only the Sergeant at arms killed another Werewolf before being brought down by the Alpha Male. 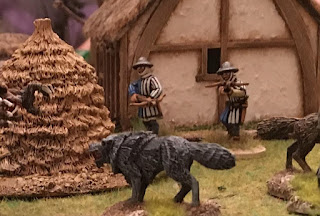 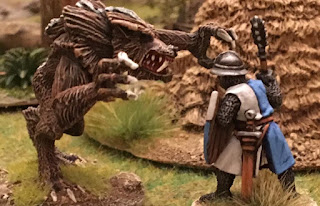 Sir Ronald’s allies who had pledged support to this holy crusade cowered in fear on the other side of the village. Their leader Sir Loin de Boef  only ventured towards the fighting when the wolf pack numbered were greatly depleted.... 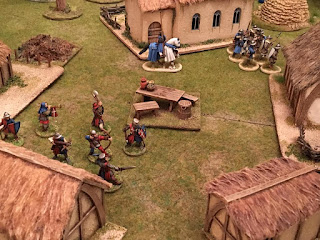